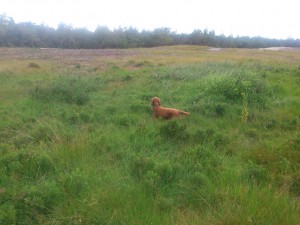 As your dog ages, you may observe how he is beginning to show lapses in mental capacity, or perhaps you notice some personality or behavioral effects with age. Like us humans, dogs can also develop dementia as they grow old. In that case, dogs (and people) become slow learners, suffer from disorientation, show forgetfulness or manifest memory loss, and they may not be able to always recognize family members, common commands or familiar places.

In fact, aging dogs may suffer from a disorder called “canine cognitive dysfunction syndrome”, which is comparable to Alzheimer’s disease in humans, because the behavioral symptoms, prognosis and course are rather similar. What’s more, the disordered changes that begin to show inside the aging dog’s brain are also similar to those of the human brain with Alzheimer’s disease.

Statistics show that 25%-60% of dogs older than 10 years of age show at least one of the symptoms of brain aging.

Nobody knows for sure what exactly leads to Alzheimer’s disease or canine cognitive dysfunction syndrome in the first place, though scientific data have accumulated suggesting that our individual lifestyle has huge importance. Hence, keeping mentally, physically and socially active is the key if you wanna avoid dementia.

In other words, those who engage in challenging mental, physical and social activities like studying/reading new materials, exercising regularly, discussing complex issues with peers, engaging in social games with many different people, solving crossword puzzles, engaging in long-term projects, competing with others (even for fun) or similar tasks are much less likely to develop dementia as their minds and cognitive abilities remain intact.

In recent times, several scientific studies have demonstrated that the same goes for our dogs.

Hence, by keeping aging dogs mentally, physically and socially active, the effects of aging and cognitive deterioration can be significantly slowed down, countered or even reversed.

It means that dog owners need to set up novel tasks for the dog to solve, make sure he experience new places on a weekly basis (that is take him to different, new parks, countryside areas, beaches, cities, forests, fields, etc), gets to greet other people and their dogs, -and not least, make sure he gets plenty of physical exercise.

In this context, it should be noted that a diminished ability to move and run freely is the best indication of premature aging. In other words, inflexibility heralds the approach of death, while mental and physical flexibility are the hallmarks of brain fitness, vigilance and longevity.

Even if it sounds a bit challenging, it can be done, and perhaps the most easy way is to engage in more daily walks with Fido.

Simply increasing physical activity may help to strengthen the brain and offset the effects of aging in the same way that increasing mental activity does. Scientists already know from laboratory experiments that individuals who spend a lot of time running or likewise exercising have significantly better brain capacity including a better memory than those, who are sedentary.

Those who take a brisk walk for one hour a day show much less if any brain shrinkage with age as compared to their immobile comrades. Interestingly, the effects are most striking in the brain areas associated with complex learning, memory, concentration and abstract reasoning, ie. in the hippocampus and in the frontal lobes of the brain.

It turns out that exercise affects canine and human brains in the very same way. Moreover, brisk walking is especially good because it also increases your blood circulation and the oxygen and glucose that reach the brain tissue. In particular, brisk walking is a moderate exercise, not a strenuous one, so your muscles won’t steal the extra oxygen, like they do if you go for other forms of exercise like cycling or fast running. As you walk your dog, you both effectively oxygenate your brains, improve energy production and waste removal. Studies show that in response to exercise, the brain’s blood vessels may grow and extend their branches, even in middle-aged sedentary animals, in particular if you make sure to visit new areas frequently.

Hence, take your dog to new dog parks, forests, city areas, visit different people’s homes, etc etc, instead of walking the same path every single day – as being in the same spot every day will bore you as well as most dogs to (premature) death.

In line with this, don’t make the mistake of assuming that as long as your dog has access to the yard, he’ll get enough exercise. No dog will begin to run laps by himself in a yard-or do much of anything besides waiting for you to join him or let him back inside. Why? -Because dogs want to interaction with us, that’s what counts.

So, the mesage is clear cut: You need to clip the leash onto Fido’s collar and get outside for a brisk walk. Whether you own a middle-aged, elderly or a very old dog who may even show the first signs of dementia, the best way to stave off the canine cognitive dysfunction syndrome is to get going.

The more you walk with your dog, the slower is his age-related mental decline. More to the point, science shows how your own brain will reap the same protection that your dog gets, as soon as you get on your feet and get outside.